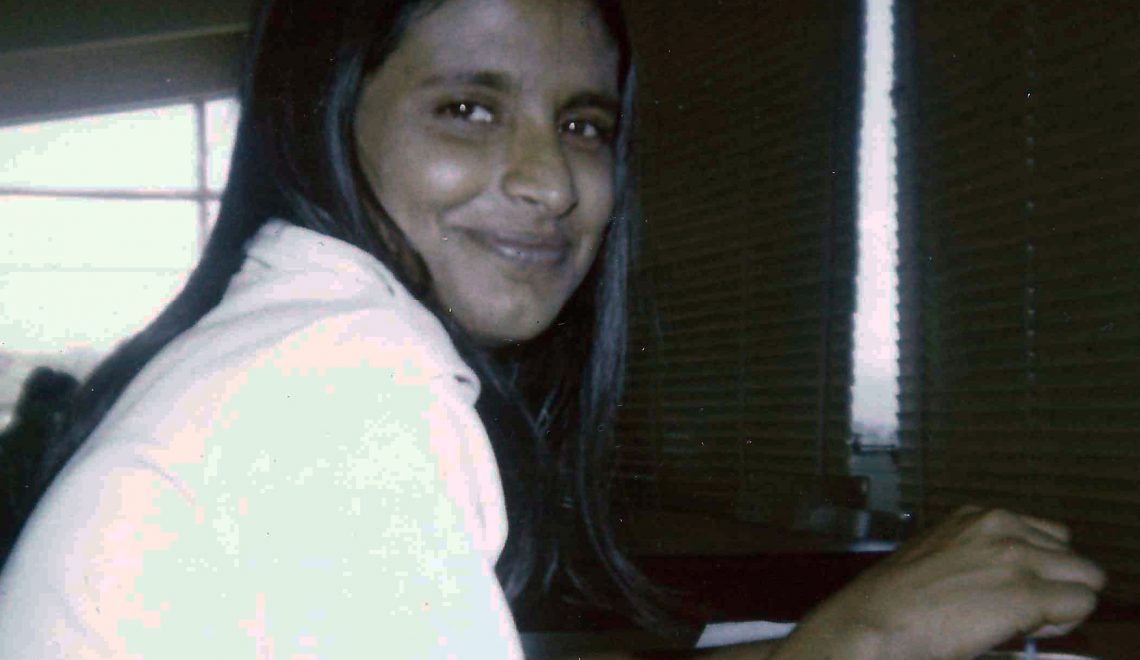 They claim that Islam gave women the right to equal education and civil and economic rights, but at the end of their analysis they come to the conclusion that a woman’s place is in her husband’s home and that she should be obedient to him and the male elite. How on earth can she enjoy any liberty if she lacks knowledge, is confined to her home and has minimal control over her life? – Shamima Shaikh

Shamima Shaikh was South Africa’s most well-known Muslim women’s rights activist. She was a newspaper editor, a radio producer, and an activist against apartheid who ultimately identified herself as an Islamic feminist. Her legacy lies in promoting  egalitarianism within Islam in South Africa.

Shamima was born in Louis Trachardt, in what was to become the Limpopo province. She spent most of her life in Polokwane (then called Pietersberg). Her father was a teacher and a committed Muslim, who had travelled to Saudi Arabia in order to study Arabic. Shamima supported her mother and took care of her younger siblings. Her sister Fatemah described her as ‘like sparkling, shimmering shards of light that danced around all of us – optimistic, energetic, and always smiling.’

Shamima attended Taxila primary and secondary schools, before attending the University of Durban-Westville, an establishment created under the apartheid system to cater to the Indian population. Here, she developed the beginnings of a political consciousness, joining a movement committed to Black liberation following the ideals of Steve Biko, subsequently  promoting consumer boycotts of companies that abused their workforce. It was during this campaigning work she met her future husband Na’eem Jeenah. Their relationship began when were arrested together whilst distributing pamphlets. They were held in the CR Swart Square police station in Durban and interrogated. Shamima boldly refused to answer any questions.

Their first child, Minhaj, was born in 1988. Shamima ended her career as a teacher in order to become a full time mother and social activist. With Shamima’s support, Na’eem became the general secretary of the Muslim Youth Movement and the editor of the progressive Muslim monthly magazine Al-Qalam. Later in life she would go on to take  on the role of chief editor herself.

She was also a member of the National Executive Committee of the Muslim Youth Movement, and chair of the Muslim Community Broadcasting Trust. She also spent time visiting Muslim women in impoverished townships, talking with them about Islam, women’s lives, and women’s rights.

She campaigned for Muslim women’s right to access to their own places of worship, calling for equivalent access to mosques as men – an irony in a country deep in debate about the prejudice and separatism. In 1994, she led a rebellion of Muslim women at the 23rd Street Mosque in Fietas. She and other women had been offering Ramadan prayers upstairs in the mosque, but on the 27th day of Ramadan – the holy night of Laylat al-Qadr – they found that their space had been commandeered by men, and that they had been relegated to a tent outside the mosque. The women reclaimed their space and Shamima recited the taraweeh prayer herself.

Her main mission was campaigning for Muslim women’s rights within their own community. The new South African constitution granted legitimacy to Muslim marriages, which while welcome to the Muslim community, raised the issue of patriarchal interpretations of shari’a which would disadvantage women. She refused to accept any reliance on male interpretations of Islam, or men speaking on women’s behalf. She focussed upon finding support for feminist ideals in Islamic texts and history instead.

In a radio interview in 1995, Shamima criticised the proposed Muslim Personal Law Bill which was being proposed, expressing concerns about men’s ability to unilaterally divorce their wives. For this, she received a stern caution from the United Ulama Council of South Africa, informing her that she was ‘in gross violation of Islamic principles’. She responded by outlining her vision of an Islam adapted to the needs of the modern world, stating: ‘We were never meant to impose those laws on our context, rather, we are meant to apply the eternal, universal and Divine Qur’an to our context.’

She was rudely rebuffed by the Ulama, which accused her of ‘gross ignorance and an arrogant refusal to accept the truth.’ Unabashed, she continued to agitate for a more egalitarian vision of Islam.

In 1997, she started a radio station on behalf of the Muslim Youth Movement, which broadcast her message across Johannesburg. In the same year, she performed hajj with her husband, co-writing a book about their experiences of the pilgrimage.

Shameema had been diagnosed with breast cancer in 1994. Despite an arduous regime of chemotherapy, it spread to her bones. Her final public engagement was delivering a speech on women and Islam at the 21st Islamic Tarbiyyah Programme, organised by the Muslim Youth Movement just a few weeks before her death. At her request, in a final defiance of patriarchal traditions, her funeral prayers were read by a woman, Farhana Ismail, and her funeral procession involved both women and men.

Shamima Shaikh was a pioneer and an inspiration to Islamic feminists, through her project of interpreting Islam through feminist hermeneutics. She embodied a passion for justice which was expressed through her strong Muslim identity, said to be based in her belief that she was only accountable to God himself.